How to Hide Apps on Android 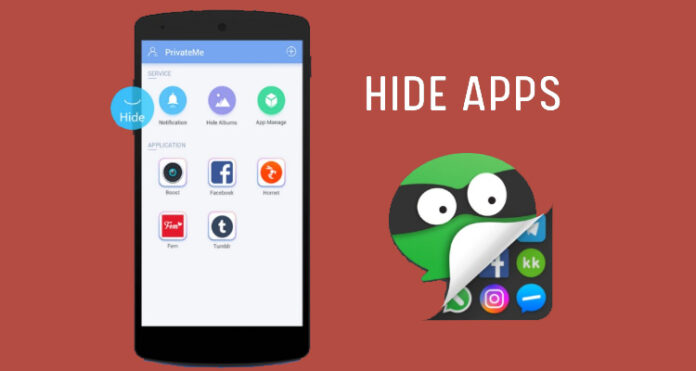 Hide apps on an Android device may appear deceptive, but it’s a wonderful technique to ensure that your personal and private information is safe if your device is lost or stolen. Although the Android operating system makes it difficult to hide sensitive apps, there are a few options for removing bloatware and keeping your personal information safe from prying eyes.

Smartphone users nowadays use a lot of apps because there is one for almost every task they perform on their devices. However, there are some programs that you do not wish to share with others. We can think of deactivating or deleting an app when we want to hide it on Android. However, it has significant disadvantages, such as requiring all of your app’s data.

Some Android phones, such as those from Samsung’s Galaxy range, may also allow you to conceal apps (along with images, documents, and other items) in a protected folder. To open a secure folder, such as an app vault, you need a pin number or biometric security key.

To access anything hidden in the secure folder, anyone with access to your device will require that key. On a Galaxy device, creating a protected folder is simple. To protect your personal data, you do have some options to hide apps on an Android device. Then you may rest assured that it is protected from anyone who has gained unauthorized access to your phone.

Samsung, OnePlus, and Xiaomi all have built-in functionality that allows you to hide apps using their proprietary launchers. On OnePlus phones, here’s how to hide apps:

You can utilize a third-party app launcher if your phone’s UI doesn’t allow you to conceal apps. You can hide apps from the home screen and from the app drawer with a launcher like Nova Launcher Prime.

You can leverage various users’ features to hide apps without using a launcher. Essentially, you’ll need to create a new user profile and install the secret apps in that profile. Each profile is distinct from the others, and installed apps are only accessible from the profile where they were installed.

Apps that you download from the Google Play Store or other sources that aren’t pre-installed on your device can’t usually be disabled. It takes a little more effort to hide those apps. You’ll need to use a third-party app to complete the task. App-hiding apps from third parties come in a variety of flavors.

Calculator Vault, for example, hides apps within a folder that is hidden by another app. This cloaking app is sometimes fully functional, and sometimes it’s just a dummy app. The idea is that anyone looking for the apps you’re trying to hide isn’t going to dig much deeper than the surface.

Other apps, such as Apex Launcher, give your device a completely new skin (or interface), including secure folders that require a password to access, where you can store apps you want to keep private. AppLock, for example, is a non-hiding app vault that doesn’t try to hide the fact that it’s hiding apps.

You create a pin code to gain access to the vault’s contents, but the vault is visible to anyone who has access to your phone. App hiders are an excellent way to keep apps that you don’t want others to see safe. Just take some time to review a few of them before you make a final decision about which one to use, as each will have different features and requirements to work.

Even if you don’t have Nova Prime, you can still use this feature. In addition, you don’t have to manually unhide apps when you open the Settings app to use them. Some custom UIs like the OnePlus launcher also offer similar functionality.