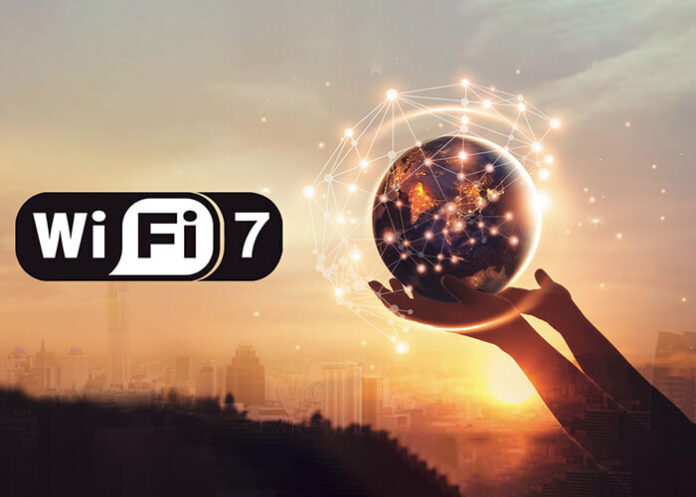 Last year, the WiFi Alliance announced WiFi6E, the latest iteration of WiFi6, sometimes known as ‘killer WiFi’ or ‘extended WiFi.’ Wi-Fi 6 Extended allows for the use of the 6 GHz spectrum for unlicensed Wi-Fi activities. But, with the promise of faster data capacity and lower latency, a new Wi-Fi is set to compete and displace the older versions.

Wi-Fi 6 (IEEE 802.11ax) is the most recent generation of Wi-Fi, which debuted in the fall of 2019 and is steadily making its way into the commercial market. Furthermore, Wi-Fi 6E, the first amendment to IEEE 802.11ax to accommodate the state-of-the-art 6 GHz radio frequency band, will be available soon. Despite all of this new technology, the Institute of Electrical and Electronics Engineers (IEEE), which defines Wi-Fi engineering standards, and the Wi-Fi Alliance, which certifies Wi-Fi technology, are planning for Wi-Fi 7 to arrive (IEEE 802.11be).

Although the development process is still in its early stages (May 2020), with no draught specification in place, a review of the conversation in the 802.11 Working Group provides insight into the main improvements of 11be. In addition to the features listed above, they provide native multi-link operation, channel sounding optimization, which enables large MIMO, sophisticated PHY and MAC approaches, and access point collaboration.

In the fall of 2018, the IEEE formed the IEEE 802.11be Extremely High Throughput (EHT) Working Group. They have lofty ambitions and must adhere to stringent regulations in order to meet ever-changing connection requirements.

Wi-Fi must continue to improve the user experience by raising performance, increasing spectrum efficiency, and lowering prices in order to remain a leading connection technology. These are Wi-Fi 7’s objectives. The IEEE still has a lot of work to do in order to approve and publish 802.11be by the deadline of mid-2024.

The seventh generation of Wi-Fi is also called Wi-Fi Extremely High Throughput due to its 30Gbps speeds almost three times faster than that of its predecessor Wi-Fi 6. WiFi7 promises to utilize radio spectrum, making it faster. The throughput also doubled, with the channel size nearly doubled from the already existing 160Mhz in WiFi6 to 320Mhz.
Wi-Fi 7 will support 160+160MHz, 240+180MHZ, and 160+80MHz channels to combine non-contiguous spectrum blocks.

It’s usual practise to start working on future wireless technologies at the same time as the newest standard is released. Wi-Fi 6 is nearing completion, therefore it’s time to look ahead to Wi-Fi 7.

The most significant enhancements that Wi-Fi 7 is expected to provide are listed below.

Wi-Fi 6 is a new wireless transmission standard that is 40 percent faster than the current Wi-Fi 5 standard. Multi-user, multiple-output (MU-MIMO) is a feature introduced in Wi-Fi 6 that allows eight data streams to work at the same time.

Wi-Fi 7 will have coordinated multiuser MIMO (CMU-MIMO), which will enable up to 16 data streams simultaneously on all three frequencies (2.4 GHz, 5 GHz, and 6 GHz).

Multi-link Operation (MLO) allows devices to broadcast and receive data over many bands and channels at the same time. Wi-Fi 7 aims to improve these connections by improving throughput, which is the rate at which data is transferred between devices in a local network (LAN). MLO will also increase reliability and reduce latency (network.server time).

Coordination of the AP

The following are examples of this type of enhancement:

Processing in a group (JT)

This type of improvement could lessen the number of Wi-Fi 6 collisions now occurring.

Increased speed should result from the capacity to use more radio spectrum. Wi-Fi 7 will increase the maximum channel size from 160 megahertz (MHz) to 320 megahertz (MHz). As a result, the throughput will be doubled.

Modulation at a Higher Level

Quadrature Amplitude Modulation (QAM) is used in the majority of wireless networks (QAM). This method comprises of a signal that is modulated and merged into a single channel from two carriers. Wi-Fi 5 standards support 256-QAM, while Wi-Fi 6 standards support 1024-QAM, which transports approximately 25% more raw data. Wi-Fi 7 is expected to feature 4096-QAM, which will enhance throughput by 20%.

Orthogonal Frequency-Division Multiple Access (OFDMA) was introduced in Wi-Fi 6. (OFDMA). Multiple users with varying bandwidth requirements can connect to a single AP at the same time using this technique. OFDMA will be used again in Wi-Fi 7, but with more flexibility. The upgraded OFDMA version will permit direct link broadcasts as well as the assignment of punctured resource units (RUs) to a single station (STA). These enhancements will improve spectrum efficiency and latency, resulting in a better user experience.

Latency is low. Many of the above-mentioned improvements/changes (e.g., MLO, multi-AP, broader channels) will reduce latency even more. Furthermore, latency will be more consistent and predictable.

Apart from improving the performance of current applications, Wi-Fi 7 will also enable a slew of new experiences. Consider the most advanced Extended Reality (XR) apps, which are so latency-sensitive that they become non-functional until extremely low latency metrics are reached. Extremely high-quality video with extremely high refresh rates is required for immersive, realistic XR experiences, which necessitates extremely high speeds and bandwidth. Furthermore, the network must have a high capacity to accommodate a large number of people using such applications at the same time. Cloud gaming, social gaming, and Metaverse are three more applications that will push wireless technology to its limits and for which Wi-Fi 7 will provide adequate performance.

Intelligence and value are going to the edge of enterprise networks. Enterprise digital transformation requires the use of edge-cloud. With Wi-Fi becoming the final hope for many enterprise use cases, Wi-Fi 7’s low latency and bandwidth, especially in dense, high-traffic settings, will become important for many business-critical applications. It goes without saying that Wi-Fi 7 will fast become a must for supporting high-traffic use cases such as offices, entertainment venues, and other such locations.

With numerous developing technologies in place, Wi-Fi is already prepared to handle a variety of use cases. Wi-Fi 7 will help Internet of Things (IoT) and Industrial Internet of Things (IIoT) applications such as industrial automation, surveillance, remote control, AV/VR, and other video-based applications for businesses. Wi-Fi 7 will have a significant impact on gaming AV/VR for end users. Wi-Fi will be widely employed in the medical industry at remote areas to undertake operations by robots and machines in the event of an emergency, owing to its low latency and high bandwidth.

Wi-Fi 7 is expected to have a slew of new features and advancements that will give all organisations interested in digital transformation more flexibility and efficiency. To put it another way, Wi-Fi will improve. The following professions have a bright future ahead of them:

Unlike previous Wi-Fi standards, Wi-Fi 7 is technologically advanced, backward compatible, and takes into account different spectrums such as 2.4G, 5G, and 6G. There will be less bandwidth and more channels in Wi-Fi 7 thanks to the all-new 320 MHz channels. With the growth in speeds in conjunction with low latency, the number of parallel streams on different devices grows. Wi-Fi 7 is expected to be released in the following year.

Which Smart Speaker is Better: Amazon Echo or Google Nest?