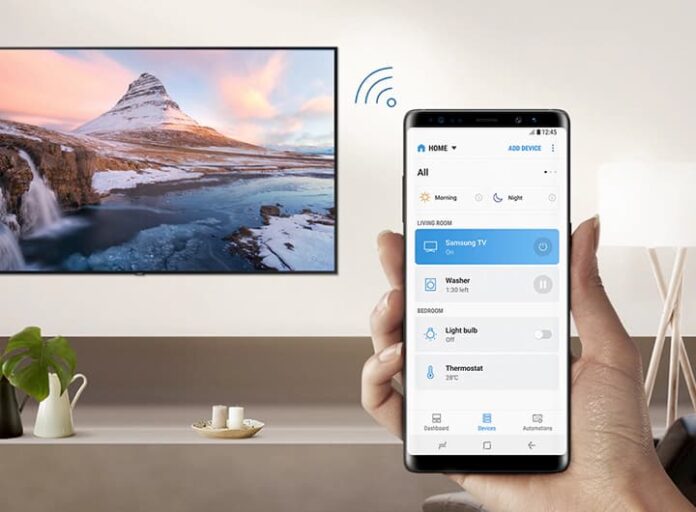 Connecting your smart TV to your smartphone or tablet offers up a world of possibilities for streaming and casting content from your mobile device to your TV’s enormous (or at least bigger) screen. For example, you might want to show your friends and family some old holiday photos, stream a YouTube clip or video file in a higher resolution than your phone or maybe cast a fitness lesson to your TV so it’s simpler to follow, or continue watching the Netflix show you were watching on your commute on the big screen.

The majority of new televisions are now smart televisions. This means they come pre-installed with Netflix and YouTube applications and are linked to the internet. If there’s anything lacking and you want to get your hands on most of the video or broadcasting content you could possibly desire, you can even connect one of the top streaming devices to your smart TV.

Streaming via a smartphone or tablet, on the other hand, gives you much more. We’ve got the solutions for you if you want to see files, utilize an app that’s only available on mobile, or would prefer to keep a play session continuing on your phone then open up the relevant app on the TV. Continue reading to learn how to connect your phone to your TV using either a wired or wireless connection.

Here are a few ways to connect your mobile to the TV for iPhone and Android Users:

The first true standard for connecting an Android handset to television was Mobile High-Definition Link (MHL). It uses your phone’s built-in USB connector and a specific cable to convert the display output to a TV-readable format on the other end. To put it another way, it’s a USB to HDMI cable. MHL cables are divided into two categories: active and passive. The most prevalent form of cable is active. Because they conduct the actual conversion, they can operate with almost any TV, although they do require an additional power supply to do so (usually in the form of a built-in full-size USB plug).

Passive cables do not convert anything on their own. Instead, they’re meant to be utilized with an MHL-capable television, which is becoming increasingly rare. The use of passive wires does not need the use of additional electricity.

Slimport, on the other hand, functions in a similar way. Slimport is unique in that it can output the signal to DVI, VGA, and DisplayPort in addition to HDMI. Slimport, other than the increased freedom in port type selection, functions in much the same way as MHL.

Screen monitoring is a wonderful technique to link your device to the smart TV if your app doesn’t support casting options. There are two ways to do this, and they change based on your phone model.

On a few handsets, you can quickly discover the cast button by swiping down on the settings shade. This is the same for all casting-enabled apps. Simply click this icon to share your screen with the television.

Connecting to Smart TV by Airplay for iOS:

AirPlay, Apple’s patented technology for casting audio and video wirelessly, will be available on Apple devices.

AirPlay is supposed to function solely between Apple devices, but if you’re transferring content from your iPhone or iPad to your Apple TV, you’re in luck. If both devices are connected to the same WiFi network, they’ll recognize each other immediately, and you’ll be able to pick the AirPlay connection in your phone’s settings, just like you would with Bluetooth for connecting to wireless headphones.

If you don’t want to deal with any wires or cables, you may always use casting. Casting is the technique of streaming video wirelessly from your mobile or tablet to your television by connecting to the same WiFi network as your TV. Although most contemporary Android phones (Android 4.2 and up) and Windows devices (Windows 8.1 and above) will support the Miracast casting standard, smartphone apps like AllCast will be able to cast directly to your TV.

To use Miracast, go to your phone’s display settings, tap Cast, and then tap Enable Wireless Display to see if there are any nearby devices to cast to. You may also utilize a streaming device such as the Google Chromecast or Roku Streaming Stick, which plug into your TV’s HDMI port and can be linked wirelessly by Android 4.4.2 and above devices.

This solution would need to use an internet connection to link your device to your television. If your television is connected to the internet, it will most likely support DLNA. This is a type of streaming media that may be found on a variety of devices. You may effortlessly stream any type of unprotected files with this.

One advantage of using this approach is that you can simply stream media from your mobile and other devices such as a tablet or a laptop if you use the correct application. You may broadcast to your smart TV and any game console via DLNA.

LocalCasts is an Android software that can enable you to broadcast all of your files to a DLNA device.

Vodafone-Idea Launches eSIM in India: Here’s How To Use