HomeApplicationBest Coding Apps for Kids on Android and iOS
Application 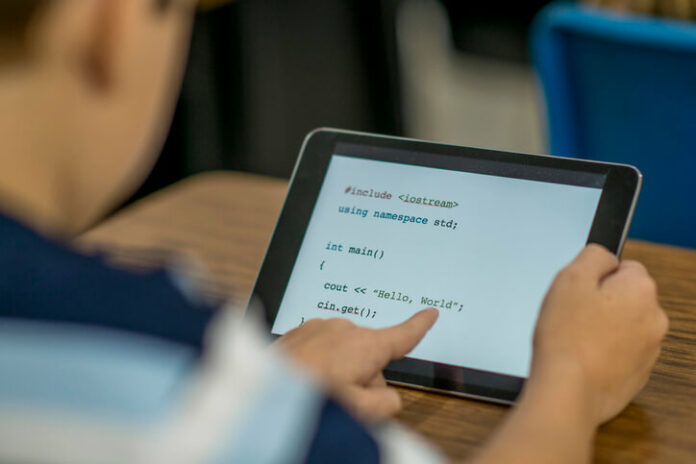 Coding will be one of the most useful and in-demand skills in the coming years. Encourage your children to learn to code at a young age, and you’ll reap the benefits in a variety of ways. A child’s brain is more receptive than an adult’s, so he or she may acquire knowledge faster. When children are young, they learn a language quickly. It’s a good idea to start teaching kids how to code and familiarising them with computer programs as soon as possible. This can help kids learn programming languages as well as a wide range of other languages.

Children can be introduced to coding and computer languages in a variety of ways. One of the most efficient methods to achieve this is through children’s coding apps. It’s an intriguing idea to educate kids on how to code in a fun and engaging way. This interactive tool for kids allows them to grasp the concept of coding and immerse themselves in the world of programming.

Here is a list of some coding apps you can definitely check out:

ScratchJr is a beginner programming language for children. It allows young children to construct interactive stories and games on their own. Graphic programming blocks are used in this game to make characters move, leap, dance, and sing. These blocks can be used to change the appearance of characters in the paint editor by children.

They have the option of adding their own voices and sounds. They may also utilize the programming blocks to bring their characters to life by inserting images of themselves. The ScratchJr app is a collaboration between Tufts University’s Developmental Technologies group, the MIT Media Lab’s Lifelong Kindergarten department, and the Playful Invention Company.

To teach the principles of computer programming, CodeSpark Academy employs a variety of interactive learning experiences. Puzzles, games, step-by-step creative projects, game concepts, and offline printables are all part of the program, which is taught by adorable characters. The software is aimed at youngsters aged 4 to 9, and it assists them in learning fundamental programming concepts and applying them to their own projects.

If that wasn’t enough, you can rest easy knowing that there are no in-app adverts or micro-transactions for them to unintentionally click on, and everything can be monitored by parents for further security.

Tynker is a free coding tool that can be used on the web and on iOS devices, but it also offers a paid premium upgrade. Although it is new software, it has quickly gained popularity. It is appropriate for both younger and older children and teenagers, with high school students having the option of learning Python.

Tynker has a number of tools that can assist children in learning to code. It features games and riddles to complete, just like Code Monkey. It also includes Javascript and Python courses, class materials, story-based challenges, learning modules, and more. Furthermore, Tynker provides a library of user-created projects that other students can explore to see what the community is up to.

Hopscotch is one of the best coding apps available, with a variety of games meant to teach the fundamentals of programming. It offers kid-friendly programming that allows kids to code anything they desire, from games to stories to artwork. This software includes play-along video instructions that teach youngsters how to construct Crossy Road, PokemonGo, and other games. Hopscotch is a coding app for iPhones and iPads.

It makes use of functions like conditionals and loops without requiring the child to learn their names, instead of focusing on the logic of how they might be employed. Using the drag-and-drop commands, you may make the dinosaur Daisy jump, move, or dance.

SpriteBox is a sophisticated coding game based on Mario. The software has several stages where children may play games ranging from simple drag-and-drop coding to writing actual code as the game progresses. It features a fun design that keeps the youngsters entertained while they study. Both Android and iOS smartphones are supported in this game.

A solid library of science-based, game-like tasks distinguishes this program. Each exercise has been carefully crafted to improve a specific skill. Mimo can assist you in learning any programming language, including HTML, CSS, SQL, JavaScript, Python, and others.

It provides rapid feedback to ensure that children are led throughout the learning process. More importantly, the software serves as a true instructor, providing much-needed advice on how to decipher the ambiguity and enhance overall performance.

Cargo-Bot is free coding software that works on both Android and iOS. It’s appropriate for kids aged 10 and higher. This software specializes in puzzle problems involving a robotic arm that must be taught to accomplish various tasks, the majority of which involve moving colored boxes to create a specific design or pattern.

Cargo-Bot was constructed on an iPad with the help of Codea, a touch-based coding software. Codea, in turn, is based on the computer language Lua, therefore Cargo-logic Bot is extremely similar to that language and helps learners learn Lua. Using Lua right away, however, would not be appropriate for younger people.

Coding Safari has a terrific teaching technique for children aged 2 to 10. It guides students through the process of learning to code by teaching them the principles of coding, such as critical thinking and problem-solving. While solving puzzles and learning to code, this coding program encourages a child’s brain to think logically and sensibly.

Grasshopper is a fun coding software for kids that teaches you how to create actual JavaScript through visual puzzles and short games. It aids in the development of abilities and basic programming skills. It also features real-time feedback that acts as a teacher, guiding you through the process. It’s compatible with both Android and iOS devices.

Best Note-Taking Apps for iPad – All You Need to Know

Best iPad Accessories Every Apple User Must Have

Best Note-Taking Apps for iPad – All You Need to Know

Importance of Mobile Phones in our Daily Life

How To Stop Mobile Phishing Attacks

When is the Best Time to Buy an iPhone?